Saturday, February 1, 2014 - Have you stopped rowing the boat of life because you are overwhelmed with the storms? Will you start rowing again today?

The Gospel reading of today appears immediately after Jesus has completed the Parable Discourse. It is commonly referred to as the miracle of the calming of the storm. While this miracle appears also in the Gospels in Matthew and Luke, the language of the disciples in Mark is harsh. In Matthew, the disciples address Jesus as Lord, and their cry is a plea for help, much like our “Lord have mercy” at the penitential rite. In Luke, like in Mark, Jesus is addressed as “Master” but no allegation about his uncaring attitude is made.

In Mark, the disciples allege that Jesus is unconcerned about them. Mark also brings out the contrast between the agitated disciples and the serene Jesus. Jesus is able with a word to calm the forces of nature, and suddenly, there is a great calm.

The boat has often been seen as a symbol of Christianity. The storm then would be the trials and tribulations that attack Christianity from without. Jesus is present with his people even in the midst of all these trials, even though sometimes it may appear that he is asleep and unconcerned. He is able with a word to clam these forces, and so there is no need for agitation and anxious care. We need to keep rowing and trust that he will see us safely to the shore.
Posted by Fr. Errol Fernandes SJ at 10:32 No comments:

YOU SOW, GOD WILL MAKE IT GROW

Friday, January 31, 2014 - Do you more often than not focus on the present or the future? Do you focus on the now or on the later?

In the first parable the point that is being made is that the one who scatters the seed only does so and then goes about his routine, not worried about the outcome of his effort. The seed continues to grow, simply because he has first scattered it. He knows that by worrying the seed will not grow faster, and so he lets it be.

In the Parable of the Mustard seed, the point that is made is that from little, there will be much. Small beginnings have great endings. The parable is a call to begin what one has to do without worrying about how small or big the outcome will be. The growth is sure and definite.

When Mark says in 4:33 that Jesus did not speak to the people without a parable, he is in effect saying that there was a parabolic character about all of Jesus’ teaching. This means that all of Jesus’ teaching involved the listener and it was the listener who supplied the lesson to the teaching and not Jesus. This indicates a freedom of choice that every listener was given at the time of Jesus. They were the ones to decide for or against. Jesus would never force them to accept his point of view.

It is sometimes the case that we spend much of our time worrying about the outcome of our actions even before we can do them. This attitude does not allow us to be in the present moment and so the action that we do is not done to the best of our ability. We do not put ourselves fully into the action that we do. At other times, we do not act at all but only worry. While the first of today’s parable is calling us to act and then relax rather than worry, the second is assuring us that our actions will indeed bear fruit.
Posted by Fr. Errol Fernandes SJ at 05:17 No comments:

Thursday, January 30, 2014 - How would you define the WORD OF GOD? Have you assimilated this WORD?

The text of today follows immediately after the interpretation of the Parable of the Sower and the seed and contains two similes: that of the lamp and the measure. In Mark they seem to be connected with the response that a person makes to the Word spoken by Jesus. This Word is not an esoteric or secret Word. It is a Word that is to be make known, to be revealed, like a lamp is to be on a lamp stand. If one is open and receptive to this Word (the Measure of one’s openness) one will receive from God not only the ability to understand it but also to assimilate it.

Sometimes our closed attitudes and minds and our reluctance to accept change and newness may result in our missing out on all the revelations of the glory of God taking place around us. If we only open the eyes of our heart to see and the ears of our hearts to hear, we will be able to find God in all things and all things in him.

Posted by Fr. Errol Fernandes SJ at 09:57 No comments:

Wednesday, Janary 29, 2014 - How often have you given into despair and lost hope? Will you continue to hope today?

The parable of the Sower seems to point out that of the four types of soil in which the seed falls, it is LOST in three types and bears fruit in only one type. This indicates that while three quarters of the effort are lost, only a quarter is gain. However, the focus of the parable is not on the loss but on the gain, which even that one-quarter brings. The Parable is pointing out to the fact that this is how life often is. Three quarters of our efforts seem to be wasted and it is possible that when this happens we may give in to despair. However, we are called to focus not on this but on the enormous gain that the one-quarter of our effort will indeed bring.

We may tend to lose heart when we see that most of our efforts do not seem to be bearing fruit. At times like these the Parable of the Sower offers hope that even though much of our effort may seem to be lost, the gain that will arise from it will be enormous. It invites us not to ever lose heart but to keep on doing our part and leave the rest to God. It is calling us to sow and rest confident in the hope that God will make it grow.
Posted by Fr. Errol Fernandes SJ at 09:05 No comments:

ARE YOU RELATED TO JESUS? FIND OUT BY SOLVING THE FALLEN PHRASES BELOW. 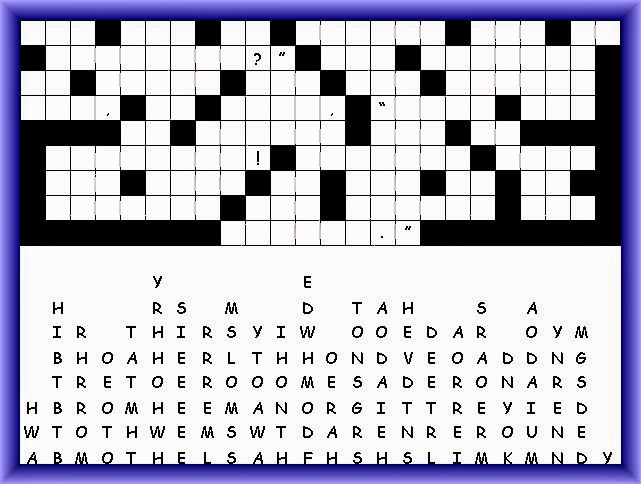 Tuesday, January 28, 2014 - If Jesus were to point to his family today, would you be counted as a member?

The text of today forms the second part of the “sandwich” construction that Mark has used here. He introduced the family of Jesus in 3:20-21, interrupted this with the text on the Beelzebul controversy (3:22-30) and returns to the family of Jesus is today’s text 3:31-35.

By using such a structure, Mark indicates that the family of Jesus are also hostile to Jesus. Also, Mark places them “outside” while Jesus is “inside” the house. This too indicates that they are not disciples. Jesus then defines family in terms of those who do the will of God. Some also think that by not mentioning the father of Jesus, Mark wants to assert that for Jesus and his disciples, only God is Father.

We may imagine that because we have been baptised are bear the name Christian we are automatically counted as members of Jesus’ family. However, baptism alone will not make us members of Jesus’ family, but the living out of the baptismal promises in our lives. This means that we must each do what we are called to do, namely our best at every given moment.
Posted by Fr. Errol Fernandes SJ at 08:30 No comments:

READ THE INTERPRETATION OF MONDAY'S READING TO SOLVE THE CRYPTOGRAM

I begin the Mission from tomorrow, Monday, January 27, 2014 in Good Shepherd Parish, Lockridge. Please keep the Parishioners and me in your prayers.
Posted by Fr. Errol Fernandes SJ at 09:40 No comments:

Monday, January 27, 2014 - Is your general attitude to life positive or negative? Will you make an attempt to interpret every incident positively today?

The text of today is known as the Beelzebul controversy. Scribes who come from Jerusalem accuse Jesus of casting out demons by the prince of demons. Jesus refutes their claim by showing how absurd it would be for Satan to cast himself out. The strong man whom Jesus talks about is Satan and the one who binds up the strong man is Jesus himself. Rather than accuse Jesus, the scribes must be able to see that with the coming of Jesus the reign of Satan is at an end.

The sin, which cannot be forgiven, is the sin against the Holy Spirit. Since there is the danger of looking at this sin as a specific sin, Mark clarifies that the reason why Jesus says this is because they accused him of having an unclean spirit. This means that the sin spoken of here is an attitude rather than a specific sin. It refers to the attitude of being closed to the revelation that God is making of himself in Jesus. It is an attitude of closing one’s eyes and refusing to see.

Today the sin against the Holy Spirit is to refuse to believe that the Spirit can transform me. Practically this means to give up even before one can begin. It means to give in or throw in the towel. It means not to give the Spirit a chance to work in our lives. It means a refusal to persevere and keep on keeping on.
Posted by Fr. Errol Fernandes SJ at 09:37 No comments:

Welcome to my blog

Thanks for coming in. Let me know what you think about 'A Jesuit's Blog' and what I can do to make your experience here better and better.
May God be with you!
You can email me at errolsj@gmail.com.

Fr. Errol Fernandes SJ
There are four maxims I try to live by. The first is to ALWAYS have CHOICES about everything. The more choices I have, the less the chances of my being disappointed. The Second is that I try to see my REWARD in the doing of the action itself. I will expect nothing from anyone in return and even expect the very ones I have helped to be ungrateful. It does not matter. I do not mind. The third is that every stage in my life I try to KNOW where my authority ends. This saves a lot of bother. I am not the General Manager of the Universe. I do what I have to do and leave the rest to God. The fourth is a readiness to face the consequences of my action. When I make a gaffe I am willing to rectify it and apologize. However, if it cannot be rectified I am ready to face the penalty.